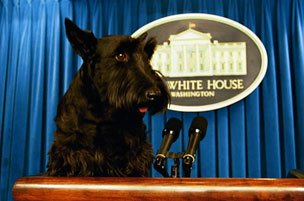 Likability is such an amorphous concept, but we do know one thing: Animals can make us seem more approachable and more compassionate.

This presidential election has a few complicated animal-related issues. Mitt Romney roof-racked his dog, Seamus. Barack Obama has a cute dog named Bo; however, Obama has his own fair share of dog troubles and once ate dog meat as a child.

If we look back in history, we know that George W. Bush used his dog, Barney, as an extension of his brand. Barney had a book series and a website, which made President Bush and Laura Bush seem like regular folk — just like you and me. President Clinton had Socks The Cat, who was known to be a cute troublemaker. Clinton also had a dog who was struck and killed by a car. Yikes. Poor guy. Richard Nixon was accused of accepting unlawful gifts and money while he was the vice president under President Eisenhower. One of the gifts was a dog named Checkers. Nixon said the following:

One other thing I probably should tell you because if we don’t they’ll probably be saying this about me too, we did get something—a gift—after the election. A man down in Texas heard Pat on the radio mention the fact that our two youngsters would like to have a dog. And, believe it or not, the day before we left on this campaign trip we got a message from Union Station in Baltimore saying they had a package for us. We went down to get it. You know what it was?

It was a little cocker spaniel dog in a crate that he’d sent all the way from Texas. Black and white spotted. And our little girl—Tricia, the 6-year-old—named it Checkers. And you know, the kids, like all kids, love the dog and I just want to say this right now, that regardless of what they say about it, we’re gonna keep it.

Tricky Dick had the country with that dog! Dang it! Don’t even get me started about LBJ picking up his dog, Him, by the ears. Animals are many things. Companions. Friends. Toys for our children. They are also political props and extensions of brands. So keep an ear to the ground and listen for more Bo and Seamus talk in 2012.