A note on narrative economics

Thanks to the Fed increasing interest rates this year, Americans are buying more homes. Housing starts, the figure economists use to track home building, fell 14.4% from April to May. At least one economist is worried.

Automating our jobs away

Well, contrary to my own estimates, robots are in fact pretty good with language. Unfortunately for me, an artificial intelligence program at JPMorgan Chase has created marketing copy that outperformed human copywriters.

Why are tech stocks down so much? If you haven’t noticed, all your favorite tech stocks are taking a nose dive. What gives? Something very simple that you learn when you become a financial professional: the discounted cash flow model, or DCF. Good news: The type of validation that the elusive blue checkmark provides for narcissists on Twitter may soon be coming to the workplace. But this is just one part of a broader reformation within capitalism.

HR Tech and others go remote. Well, it finally happened last week. What we all knew was coming finally became official: the 2020 HR Technology Conference & Exposition® will not be an in-person event. Instead, it will become a free virtual event held from Oct. 27–30. Just one more feather in the ol’ remote-only cap… But virtual life can do some […] A new interactive map from TIP Strategies shows net job losses and gains over the last two decades, with red indicating losses and blue indicating gains. You may notice a rather sudden flash of red around 2008 and another in 2020. Wonder what happened there.

The US surprisingly added 2.5 million jobs in May, beating expectations of shedding 8 million, which raised the unemployment rate to 13.3% from 14.7% in April. The market is pleased, with the S&P 500 trading around 2% above open, according to The New York Times. 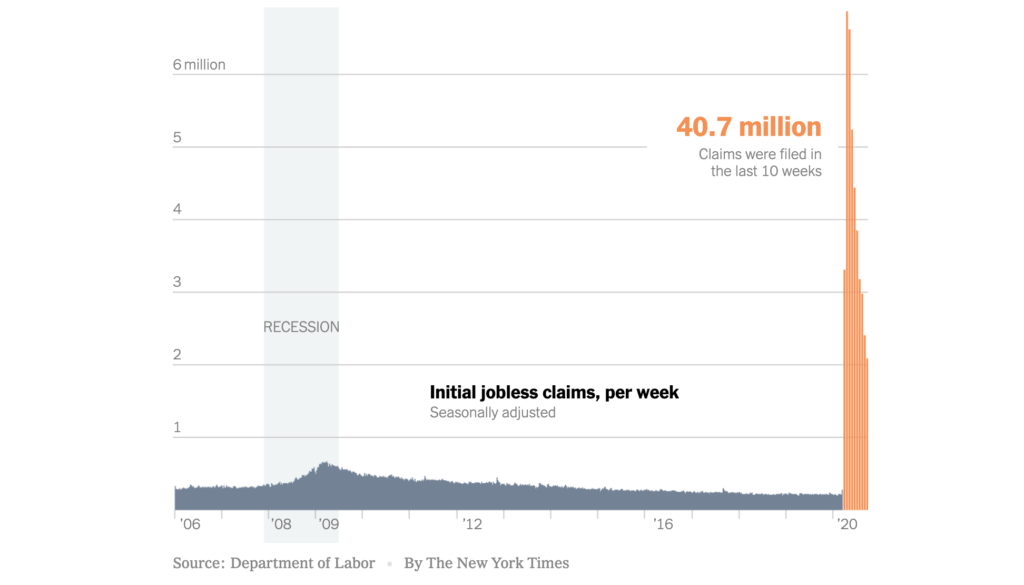 Over 2 million people filed for unemployment last week, according to fresh data from the Department of Labor this morning as reported by The New York Times. That brings the total number since March to nearly 41 million, or just over 26% of the total labor force. It’s not a tight labor market anymore, folks. The Wall Street Journal’s newsletter Real Time Economics reported that business activity is slowly stabilizing, with many leading indicators showing that the worst is over. Here’s what they wrote this morning: The worst may be over. Truck loads are growing again. Air travel and hotel bookings are up slightly. Mortgage applications are rising. And more […]

The straw that broke the camel’s tuition

Many schools have canceled classes for the rest of the year, right? Students are going online, they’re requesting returns for their room and board money, tuition is at astronomical prices—you get the point. Okay, so what happens when the entire economy of college towns collapses because there aren’t college students there, which can contribute to […]

Another 3.2 million filed for first-time unemployment this week, according to government data. That brings the seven-week total to more than 33 million, or 20% of the US labor force. The New York Times has more on the story here.

FRED at the Federal Reserve Bank of St. Louis has a new measure of the economy called the Weekly Economic Index. The index, developed by Fed economists and a Harvard professor, measures ten major indicators to get a rough estimate of how the economy is doing. You may notice a giant dip over the last […]

Another 3.8 million file for unemployment, bringing the total to over 30 million since the crisis began. With 157 million workers in the US, 30 million represents just under 20% of the workforce. However, some studies suggest this could be vastly under representing the real unemployment figures. Read more on The New York Times. Unemployment numbers continue to climb, with the Labor Department counting 4.42 million more unemployment claims this morning. That erases the jobs boom we’ve seen over the last ten years—with 26 million jobs evaporating in a little more than a month.

The department of labor data from this morning confirmed that 5.2 million more workers filed for unemployment last week, bringing the four-week grand total to 22 million. If you couldn’t tell by the chart above, that’s a lot. Here’s how The New York Times reported the figures: Even as political leaders wrangle over how and […]

Everyone is wondering what the economy will look like on the other side of this whole thing. As time goes on, the picture is becoming a little clearer, and many economists are offering their forecasts. Starkest of all perhaps is the IMF’s latest projection. Here’s what the New York Times reported this morning: In its […]

Another 6.6M down, totaling ~17M job losses this month.

Job losses continue to mount. This morning’s Department of Labor figures via The New York Times showed 6.6 million more filed for unemployment last week, bringing this month’s total to nearly 17 million. This is by far the sharpest decline on record. Stay tuned for the official unemployment rate to rise significantly over the next […]

The labor market may lose 29.7 million jobs through May. In this morning’s newsletter from The Wall Street Journal’s Real-time Economics, analysts estimate that the US may have a 16% unemployment rate by the time summer shines its bright and smiling face. This morning’s BLS data shows job losses mounting to over 700,000 in March, with the unemployment rate rising to 4.4%. So, you might […] According to jobless claims data from officials released this morning, 6.6 million people filed for unemployment last week. The week before that? Over 3.3 million. That means in just the last two weeks we’ve had 10 million people apply for unemployment benefits. A New York Times story covers the widening toll on jobs due to […]